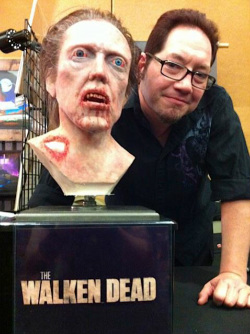 Kato DeStefan with The Walken Dead
Robert Kato DeStefan has been a make-up artist for over twenty years. He specializes in makeup application from natural beauty and men's make-up to full prosthetic make-ups.  Kato's interest in make-up came from watching a lot of television and films as a child. "My early influences included Star Trek, The Planet Of The Apes films, and The Exorcist. What really sent me over the edge was the groundbreaking effects in An American Werewolf In London and The Thing. In his late teens, Kato contacted Dick Smith (make-up artist for The Godfather and The Exorcist) and was accepted into his The Advanced Professional Make-Up Course. In 1990, Kato was hired by Steve Johnson to work at XFX Inc.. "I started at the very bottom and gradually worked my way up the ladder. While at XFX, I received the best make-up effects education you could get."

Kato has worked on the films- Innocent Blood, Batman Returns, Zoolander, I Am Legend, Underworld: Rise Of The Lycans, Watchmen, G.I. Joe, Tron Legacy and God Bless America.
T.V. Series worked on include- Sons Of Anarchy, CSI: NY, The Goldbergs and Teen Wolf.
Other work includes- Dragon Age: Redemption, The Guild, and The Discovery Channel Special- Track Me If You Can.

Kato is a Member of I.A.T.S.E. Local 706 Make-up Artists and Hair Stylists Guild

He has been profiled in Todd Debreceni's book Special Makeup Effects for Stage And Screen
Available through Amazon.com 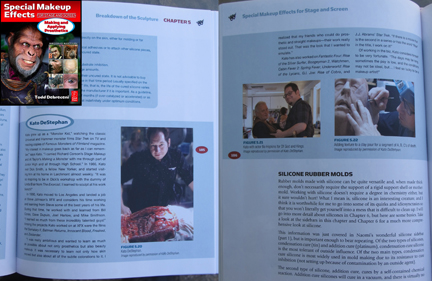